The way Uber revolutionized the on-demand cab service has always fascinated you, right? Just like the nearest cab reaches you once you have booked it through the Uber app, this clone script does the same for your towing truck business. Our clone script works much better in the following manner:

So, how can this ultra-efficient on demand roadside assistance app help you turn around your towing truck business? Nothing explains something better than a story. Here we go…

Malcolm loved his towing truck business. With families owning multiple vehicles there was always one or another car or a four-wheel-drive breaking down and people calling his office to get the vehicle towed either to the nearest workshop or a service center, or sometimes, even home.

His model was traditional, but it worked. He would sell subscriptions so that his ongoing customers could easily avail his services through a fixed cost. He would also serve non-subscribers if they called him and requested a towing service in the case of an emergency.

Then, just as it happens with every business, the competition increased and due to Uber-like services, fewer people were using their own vehicles that needed to be towed when stranded at isolated spots.

Initially, he offered various incentives to his customers such as giving discounts and providing on-the-spot servicing in case there was a minor fix, but the number of his customers kept dwindling and there came a time when he started contemplating closing down his office and selling his towing trucks. He was also buried in debt. Then he came across SpotnStay.

In a technology magazine he read about the surge in on-demand mobile apps. The idea of turning his towing truck business into an on-demand mobile app-based service excited him, but he was already in debt and felt that he didn’t have enough money to hire an app development team.

Being an entrepreneur was in his blood. He couldn’t give up easily. He kept looking for solutions on the web. He spent hours on various online forums, interacting on social media and doing his own research.

Then, one day he came across SpotnTow. Initially he was a bit skeptical because he thought why would he use a clone app? He thought that using such an app would be like stealing the idea from the other company.

Though, his interest was piqued. He did some more reading and realized that despite being an Uber for tow truck clone app, it was actually a framework that could be used not just to create a totally different app, but also to provide a completely different experience to the users. For years he had been in the towing truck business. He had an inquisitive mind but IT not being his field, he wasn’t aware of the concepts like cloud services, mobile app and other such stuff.

All these technicalities were taken care of by the SpotnTow team. Within a few days, he was able to download the mobile app on his mobile phone and set himself up as an admin. The dashboard was amazing. He could easily create various sections and change payment settings.

The best thing about the app was that now it was very easy to organize his fleet of towing trucks. Whichever towing truck was nearest to the customer could easily get to him or her and provide the needed help. This immediately struck a chord with the stranded customers. His business began to grow exponentially when other towing truck companies and individual towing truck owners started getting their vehicles registered in his mobile app on a revenue sharing basis.

The app can easily get the coordinates of the stranded driver within the perimeter of a few meters. Consequently, less time is lost giving the specifications. People can simply hit the SOS button and the help is on its way.

People are subscribing to his towing truck service through the SpotnTow towing app like uber in droves now. Thanks to SpotnTow, Malcolm is doing more business than he was doing before.

Want to know how Malcolm achieved that?

Get a first-hand experience.

Get A Free Trial 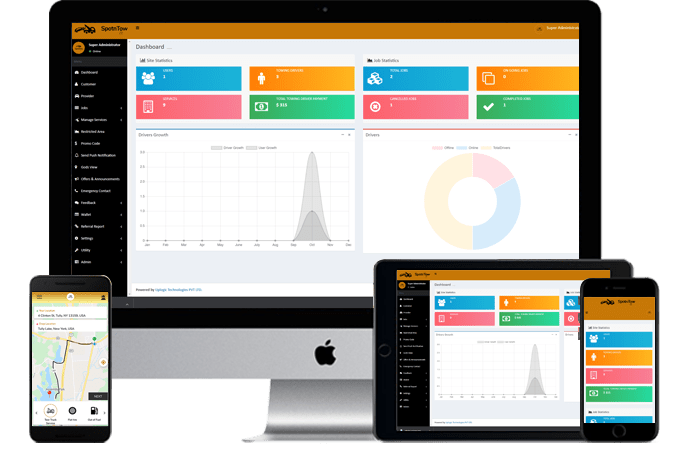 Customers can maintain their profiles and choose to get different services under multiple categories for multiple vehicles.

Using an animated map, customers can track the movement of the towing truck when coming to their rescue or while towing their vehicle.

Customers can make on-the-spot booking as well as scheduled bookings.

According to pre-saved parameters, your customers can get immediate estimate of how much the towing service is going to cost them.

Give another incentive for customers to join. They can earn money or privileges by recommending your mobile app to other customers.

The location of your customers is shared with the towing truck drivers in real-time for faster reach and accessibility.

Customer support chat: Customers can chat with your support for real-time assistance in case you are facing a problem.

Towing truck owners and providers can accept or reject bookings through their dedicated dashboard.

Towing truck owners and providers can accept money into their digital wallet from the digital wallets of the customers or even from non-wallet sources such as net banking and debit & credit cards.

The owners and providers can make extra money through referring other customers and towing truck providers.

You can send in app notifications to the drivers individually as well as in groups.

Drivers and providers can get ratings from the customers or from the admin.

Speed is very crucial for the success of your system and this is why our booking app accommodates faster listing approval so that the tow-truck can be made available to the customer as early as possible.

Manage individual customers or group them under various categories and labels to manage them en masse.

Define different services that you provide through your towing truck business and charge your customers accordingly.

Keep all the important documents about drivers/service providers under their profile including their licenses and insurance copy scans.

Offer coupons to run promotional campaigns both for service providers and customers.

Run promotional campaigns through the dashboard and reward referrals with money and services.

Get a complete picture of where your fleets are and how they are engaged in their duties.

Add-on features that can enhance the capabilities of your SpotnTow Uber-clone app script:

In-app calls/SMS
Subscription models for Customers and Providers
Cryptocurrency Payments
Customized UI
Do you feel protective about your brilliant towing truck business idea or any other idea that you would like to implement through our SpotnTow Uber for tow trucks script? Don’t worry. We will sign a solid NDA before proceeding.
Are you ready to start? Get A Free Trial

A quick glimpse of multiple businesses that you can use with our Uber to tow trucks app script!

Don’t run a towing truck service but still want an Uber like towing app script to run a similar business? The sky's the limit when it comes to leveraging our SpotnTow tow truck app script like Uber. You can charge a percentage or a commission from service providers. Here are some cool ideas:

Run a vibrant tutoring business whether you are a tutor yourself or you want to provide a service to independent tutors and students looking for professional tutors.

Run a hospital or clinic right from this Uber-clone app script that helps you launch an on-demand mobile app. Doctors can list themselves and patients can book appointments with their preferred doctor or position based on his or her specialty.

Run a handyman business from the comfort of your home. Let other handymen list themselves and provide services to your mobile app members. The nearest handyman can rush to assistance.

Let security agencies and individual security guards provide their services through your on-demand app where people and organizations needing security can make scheduled bookings or avail the service on an ongoing basis.

You can help people avoid parking woes by enabling them to book parking space in advance using your mobile app.

Young parents can book babysitters directly from the on-demand mobile app using a friendly interface, paying by the hours through the app itself.

Eliminate the reason to wait for a car wash. Your app members can book their car washing in advance so that they don’t have to wait in a queue. Immediate payments. Real-time reviews and ratings.

and basically, every service that needs a booking system. 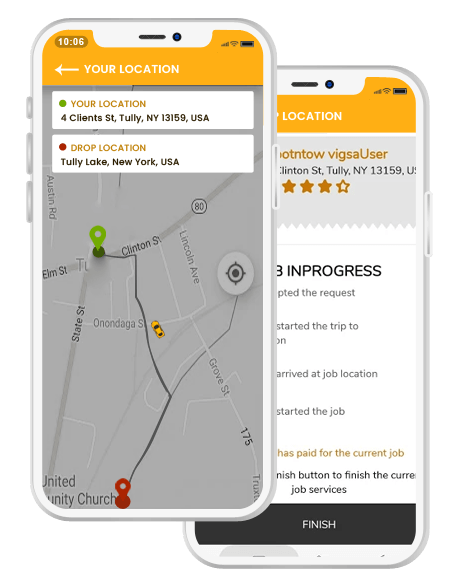 Wondering how many additional revenue streams you can generate with your towing truck app script? There are many:

Get A Free Trial

What is included in the Uber like towing app script setup?

Please rest assured: this is the best possible Uber for towing app script you can get that is powerful, feature rich and above all, easy to setup and customize.

Submit the form given below and we will get you all the details you need to get started.

What is our process of setting up and deploying your Uber like mobile app script for towing truck business?

Although, every business is unique with its unique branding and operational requirements, our app comes with all the standard features to get you started as early as possible. Nonetheless, even if you have zero technical know-how, our team is always there to carry out the complete set up for you. Right from setting up your server for the web-based interface to uploading the working versions for Android and iOS to Google Play and Apple’s App Store, respectively, we deliver you the complete solution.

Customization, branding, payment integration, website set up, logo and colours and even initial orientation, we provide you complete services. This is a full-fledged platform.


Get A Free Trial

Do I buy the whole package or can I even buy just the script?

Can I run a real business with this clone app or is it just for playing around?

We call this an Uber-clone app because it acts like the original Uber app. Otherwise, it is as legitimate as it can be. It is a framework. This framework allows you to change the fundamental settings to turn the clone app into your own app to run a real, legitimate business.

Can further features be added once the app has been deployed and people have started using it?

Like any other legitimate software our Uber-clone mobile app for your towing truck business comes with all upgradation facilities. Whenever we add new modules and new features, our existing customers will get preference over pricing and availability.

What if I want to run a multinational towing truck business from this mobile app? Is it possible?

This mobile app is exactly made for this purpose. Aside from having all the fundamental features that a typical on-demand business needs, you can run your business in multiple countries because our Uber-clone mobile app accommodates multiple languages and multiple currency processing.

Is your support ongoing?

Yes, depending on the arrangement that we have with each other, if you need our ongoing support and customization services, we are always there for you.

After buying the script from you, how much time is it going to take to start the business?

The app is quite easy to install and activate. Whatever time is taken, is taken by your customization needs. The more customization requirements you have, the longer it is going to take. We suggest, if you are in a hurry to launch your business, you launch it first with bare minimum customization options and then gradually you can carry out other changes. Get a Free Trial